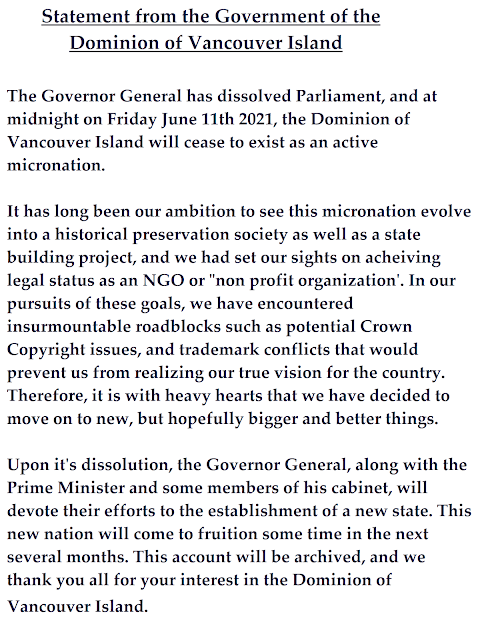 This announcement came as no surprise to those who had been following the situation involving the West Canada defence of the Vancouver Island Province. The false Dominion had asserted for a long time their legitimacy, throughout constant instability, mergers, and dissolutions, however this one is bound to be the last. Following the announcement the Dominion of Vancouver Island twitter account also deleted several tweets which paint their character for what it truly is.
Several theories have arose regarding the "new state" mentioned in the post, with some being a revival of the Vancouver Island Soviet Socialist Republic, or perhaps another try at one of the many other micronations founded by Dustin Carlson, the "Governor General" of Vancouver Island. Time will have to tell in which direction they go from here, but no doubt it will be riddled with the characteristic instability and ideology-flipping that is undoubtedly associated with any prospects of Dustin Carlson.
If Dustin Carlson ever attempts to return to the false Dominion of Vancouver Island, he will no longer have a leg to stand on as for the inconsistent 2018 / 2019 flip-flop foundation date, he cannot claim that this is a government switch, or an internal reform, as this is very definitive in its dissolution. Dustin Carlson will have to admit from here-on that he founded his new micronation in 2021, else he continue to be more blatantly disingenuous.
No matter what comes of this situation, you can all count on the WCBC to continue to document, and follow the situation closely and ensure that each and every West Canadian can be updated on everything West Canada.

July 14, 2021
Logo of the National Union of Syndicalists      During the most recent Parliamentary Session, the National Union of Syndicalists presented legislation demanding the denouncement and removal of the Westminster Crown and appeals to the Queen of England.      This proposal was met with an uproar from members of parliament, most voting ‘no’ long in advance of the actual vote.       For weeks before the general election, the NUS had been vocal about their disdain for the crown and West Canada’s fetishization of Westminster. The NUS seeks to pursue a full market syndicalist economy with a proper republic being established as opposed to the Constitutional Monarchy that is in place of West Canada’s parliament.       “This is only the beginning of a long path to a revolution of the common folks and their rightful desires.” -Head of the NUS.       It is unsure what the future of the NUS in parliament may hold, but as of right now they remain a 1 seated minority party; however their numbers slowl
Post a Comment
Read more