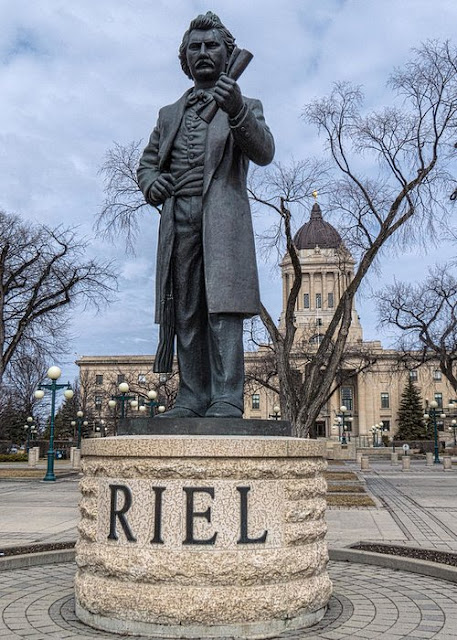 It is unsurprising to find it cumbersome skimming through lines of resolute words affirming freedom or emancipation from judgement through living with your own culture shamelessly. This value is highly visible in bulletin boards, bickering news channels, the sixteenth page of your passport, and Charlotte’s Web. Albeit this respectable regard in spontaneity, it cannot be further stressed that words, especially these, almost always remain as words on paper. Read and forgotten. At the outset of Canada and West Canada, conflict was inevitable. There was hunger for territory and power. For what reason? Influence and comfort. Some would even say it was only for the better good as if there is a superior tradition. With all that said, stating liberation as an abstract for dominance is not enough. Case in point, Louis Riel, a household name for us Canadians, led a difficult life at the helm of the Métis. It has been classically considered as fine nature to be capable in spotting and acknowledging points for all involved sides during a strife. Never being absolute with any side is what one must take account when encountering a fiasco. Because once one does, the war has ended by naked force as it highly lacks diplomacy.

I used to play this little game with friends when I was younger – about nine years old. We call it Ice Castle. One yeti, among a group of at least three, is the enemy. But consider that we were a bundle of children, thus it was beyond the minimum. Both feet must not be in direct contact from the ground for if it is not, once touched by the yeti, it is over for poor you. Simple, I assumed. Little did I know, this was one of the several games I play which is technically considered war but excluding the idea that there was not a trace of bitterness between all the warriors. And if that was not messing with my philosophy enough, everything you and I have done in this lifetime is a battle defending our own culture, comprising its uniqueness and charm. Riel was a warrior and a leader himself. He had been playing with fire in his own more extreme game of Ice Castle, goal being to attain deliverance from oppression. However, in the grand scheme of everything, it is all child’s play.

What do you think of West Canada? Undeniably handsome, immensely frigid. That said, an impressive nation which is admired by its neighbors. Still and all, racism and shame directed towards aboriginals exists enough to be alarmed for. Nearly a third of Canadians (28%) say they have personally experienced racism in the past year (5%) (ipsos.com). Including myself, can top off some personal experiences regarding racism. It is usually set aside as a source of humor and drunk conversations. Nonetheless, as a believer of change being the only permanent thing in this civilization, it is crystal clear that discipline must be incorporated within the minds of modern children in which they can grow into as individuals who can both prosper in their own village along with the atmosphere of people with different eye shapes and color, tones in skin, and manner in linguistics.

One of the grimmest events of Canadian history was the establishing of Residential Schools. Residential Schools were proxied by the government and created by Christian churches which had the end-goal of assimilating approximately 150,000 Indigenous children into Euro-Canadian culture. They were forcefully taken out of their homes and taught exclusively the English language in the aforementioned school. They were to only speak English. Make their homework in English. And most of all, never act like their native behavior. If a student ever rebels to their rules, they were punished severely. They can either be humiliated, tortured, or buried. Roughly 6,000 children died and only recently, news came to media comprising the discovery of what are believed to be 215 children’s bodies in unmarked B.C graves. To this day, it is the most frowned upon atrocity in Canadian history. Do you ever wonder if someday, trivial nasty behaviors such as racism would be a source of similar barbarity in the future? Do these hints of alienation towards people who are, in the surface, dissimilar to us, help pave out paths in finding what keeps us the same under the skin? Life is too fleeting to remain dogmatic.

Riel once said, “In a little while it will be over. We may fail. But rights for which we contend will not die.” This man has been, for a while, not highly regarded by historians due to his notoriety despite him being acclaimed as the Father of Manitoba. Inasmuch as he had his fair share of mistakes and defeat. I doubt it being enough to cower over everything which encompasses the benevolent intentions for his tribe. He was merely selfless enough to be the yeti, the bad guy, if it was for the reason of liberation of his people which greatly depended on him. Not only has he been falsely accused for a number of issues – he was at some point, described to have been succumbed to insanity. To which, devastatingly, it was mostly his friends, rather than his enemies, who accused him of going mad. One can only imagine the heartbreak from betrayal from what he religiously considered as allies. Even so, there was an unmistakable air of fortitude sojourn in the man’s tired and scarred body. Therefore, every time you intentionally or unintentionally blurt out a racial slur, statement, or joke, despite no visible signs of harm, you are subtly committing similar dehumanization to Riel and those children. Face your mistakes and never devoid from it because guilt is still a sign of good nature. However, one does not ought to wallow on yesterday’s failures and regrets. Reconciliation is beautiful. And when one ponders on it deep enough, one can realize that it is curious to find out the vast difference between the bond of two former enemies from friends who never encountered disagreement. The latter is what we call comfort and is an easy find. Meanwhile, the former pushes them to acquiesce their differences in which stronger roots are embedded. It establishes peace twice the amount of people from a solitary cultured community. Cease to be comfortable. Start discovering new ways of looking at the world through struggle. Louis Riel is praised for his multiculturalism and multilingualism which is proofed in the Manitoba Act. Riel seems like a pretty cool dude. Be like Riel. Oh, and before you and I forget, have a lovely National Indigenous Peoples Day!